skip to main | skip to sidebar

"I have learned that when that place is reached, ever so remotely, healing is possible and the freedom changes lives."

In the summer of 1954, a ten year old farm boy, who loved the water, desperately wanted to learn how to swim. Too many summers had gone by as the older boys swam in Squaconning Creek and the Saginaw River, while all he could do was splash around in the shallow water. He wanted to swim and dive off the bridge like the big kids. Attempts made by his father to teach him how to swim a couple years earlier failed as his impatient father deliberately dunked him several times. Crying and screaming but still wanting to learn, the young boy resolved never to ask his father again. Somehow he would learn on his own if he had to.

Through school, this fourth grader found out that the Red Cross was offering free swimming lessons at the big high school in town. However, because his mother didn’t drive and his father was too busy from sunup to sundown with farming chores, transportation would be a problem. That problem actually had been solved a year earlier, however, when his older brother by three years, took the same swimming lessons and got there by riding his bike 3 miles into town, catching a city bus part way and walking the remaining seven blocks to the high school. A scary odyssey for very shy 10 year old, but one he was willing to face knowing that by the time he started in 5th grade next fall, he would be good swimmer. 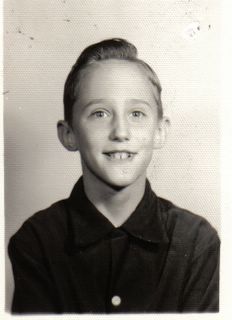 But there was one more catch—the biggest obstacle of all. He had learned from his older brother that the boys were required to shower together before the class—totally naked. That was scary!

Resolved to learn how to swim that summer, however, the scared yet brave boy filled out the registration card and mailed it in.

During the next couple weeks it was hard for the young boy to keep from thinking of the first time he would have to be in the shower naked with all those other boys. The fear was enough to keep him awake some nights but he kept thinking of how he would be the youngest kid to dive off the Church Bridge by the end of summer.

Accompanying him to the first lesson to show him how to ride the bus, where to get off and to show him how to get to the high school gym and pool was his older brother. That made the traveling part easier to learn. But standing in line in the gym waiting to get into the locker room and shower was a different story. What was probably only a few minutes, seemed like hours. Finally the moment came when a young man opened the door and led the boys into the locker area. Apparently sensing not only the nervousness of the shy farm boy but that of the other kids too, he calmly explained the showering procedure and reassured them it wouldn’t be bad…and actually, it wasn’t. It was the anticipation of it that was by far the worst part. After that, it was no problem.

The young farm boy successfully completed the swimming lessons and, indeed, by the end of the summer had become a competent enough swimmer to be the youngest kid to be diving off the Church Bridge over Squaconning Creek on Ziegler Road.

…But the memory of those anxious moments preceding the shower room would live on with the child many for years.

I grew up, married and raised a family.

Throughout the years, I had many of the typical encounters with nudity where it couldn’t be avoided, such as high school swimming class, college dorm life and Army life. Though none of these were particularly difficult for me, it often seemed easier for others, and there was a part of me that didn’t want it that way. I wanted it to be easy. And as I thought about it over the years, I came to the conclusion that it SHOULD be easy, after all, it was natural that we all have bodies and it should feel natural for us to be nude in the presence of others. Why it didn’t for me or for many others, I would come to realize, is based on a long history religious and societal negative conditioning.

Around the house as my family was growing up, I frequently wore nothing when the weather or situation permitted. It was my intention that my actions conveyed the message that the body is natural and therefore nothing to be ashamed of. Though I realized that my children would be influenced not only by me but also by the society within which they were going up, I at least wanted them to have experience the naturalness of nudity and that was something I could present. But I also was aware that out in the world they would be up against a different message, the message that the human body is shameful and needs to be covered. That they were receiving mixed messages was something I was aware of but regretfully could do nothing about, and although I talked to them about these things, I knew that they too might grow up with a certain amount of anxiety over nudity as I had, or even worse, a message that their father was weird. What’s a parent to do?

Although much within me had healed since those early childhood days of anxiety over the locker room shower, there was still much that needed to heal and I set about the healing process. I have written extensively about this in my book NAKED BEFORE GOD: A Look at Healing, Self-discovery and Spiritual Growth Through Social Nudism. The word that best describes the results of the healing is “freedom.”

What I would like to add here is that I have learned that there are many people who, like myself, have had these negative childhood experiences with nudity but, unlike myself, as yet have not done anything about it—they have not healed. In fact, many times these memories have been stuffed way down, supposedly out of the way and forgotten, yet they can still be influencing their lives in many ways. The good news is they too can be easily healed. That my experience as a shy eleven year old is still so vivid in my mind enables me to know that somewhere inside them, however deep it may be, there is a part of them that could be healed, that wants to be healed, that wants to be free. To be able reach out to these people and know how to initiate the healing process is the gift I have received from this childhood experience. I have learned that when that place is reached, ever so remotely, healing is possible and the freedom definitely changes lives for the better. I have seen it time after time.

As I said, the anticipation over being seen nude in the shower room before the swimming lessons was by far the worst part of the experience for me. Once I realized I was alright and that nothing bad had or was going to happened to me, nudity became much easier, as I also mentioned. The healing had begun.

During the summer of 1954, in addition to learning how to swim and dive off the bridge, I also added a bonus feat which may even have been more significant than the swimming itself. I went skinny-dipping for the first time--under the bridge, of course, and out of view of the church. Anyone who skinny-dipped as a child certainly remembers it, and while my memory of the shower room anxiety has slightly faded over the years, the feeling of freedom skinny-dipping hasn’t.

To receive a free e-copy (PDF file) of my book NAKED BEFORE GOD: A Look At Healing, Self-discovery and Spiritual Growth Through Social Nudism, go to http://less-onsfortruth.com/ or email me ddziegler44@yahoo.com

Posted by Daniel D. Ziegler at 7:34 PM No comments:

Daniel D. Ziegler
Dan, a grandfather, is a graduate of Wayne State University and a retired salary employee of General Motors. Brought up in traditional Christianity, his spiritual path has since greatly shifted toward Earth/Goddess-based and Nature-oriented spiritual practices. Dan adds, "Spiritual practices (or any social systems or institutions, for that matter) that ignore or fail to recognize and honor the body and sexuality, deny and degrade a basic and essential part of who we are, and, for that reason, predictably fail at raising our consciouness." Since retiring Dan has done a variety of activities including a year living in and working at a major nudist resort as a tour guide and giving orientations to newcomers. It was during that period he wrote a book entitled NAKED BEFORE GOD: A Look At Healing, Self-discovery and Spiritual Growth Through Social Nudism. "The articles I've written and posted here," he emphasises, "are an extension of my thinking since writing the book." To read or dowmload a free e-copy (PDF file) of NAKED BEFORE GOD, go to http://less-onsfortruth.com or email me ddziegler44@yahoo.com